Just dropping by to share a card I made this week for the Saturated Canary “Fairytales” challenge... All fairytales have a princess in them, right? So for my card, I chose Krista’s “Princess Honor.”  I also selected her because of her “warrior” look and I was eager to play with that type of image. This was not an easy image for me to color for many reasons…first I decided to clean the nibs of my often used “E” copics by soaking them in alcohol which is great, but I think I did not let them dry well enough so that when I put them back into the sketch case and colored with them, they were diluting the ink I just lay down. Ugh! Lesson learned!  It may have also been responsible for a lot of ink seeping over some lines,  so you will see quite a bit of “white” inksentialls pen and white sharpie in some places!  Still I just love this image and it helped me practice coloring hair (thanks Suzanne Dean and Zoe McGrath for your “hair” tutorials and pdf’s) and “large and small spaces”…after about 7 or 8 attempts, I stayed with this image and here is my card…. 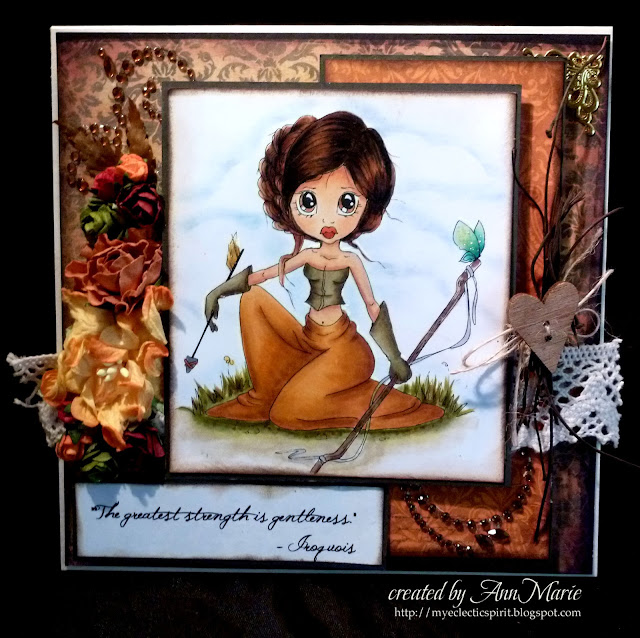 Something about this image really moved me- maybe it is her strength and yet her tenderness evidenced by the butterfly on the tip of her bow and those big eyes, but I really like it!  I searched for some Native American quotes on strength and honor and I stumbled on this one by the Iroquois which I think sums up what this image is saying…I printed it out using a free font I downloaded from DaFonts called “Jellyka Western Princess” into MS Word.  I simply put in search words such as “western” or “princess” and these fonts come up for selection. Simply download to your desktop and then right-click “install” which imports the font right into your word program!
“Princess Honor” was colored with copics- primarily E81, 84 and 87 (and a little YG93/91) for her top and gloves and YR 24, 23, 21 and 20 with some deeper E’s (99, 97 and 23) to deepen shadows on her skirt. By playing with many shades on her skirt, I hoped to achieve a “suede” look. By that I mean I left some areas looking “unblended” and blotchy to mimic how the light plays with the nap of seude fabric.  I colored some clouds with a handmade cloud template and some Pebbles blue iridescent chalk. The design paper comes primarily from Basic Grey’s “Curio” and the burnt orange dp from another Basic Grey pad that I don’t recall!  The cardstock is PTI’s “Smoke” and it is a great black/brown color!  Flowers and metal corner are from Wild Orchid Crafts.  For the “embellishment” on the right, I used a tip from Dena Concienne’s “Cornelia” card  (another Saturated Canary image) and the cut some “twigs”  from a Fall wreath now hanging over my fireplace and wrapped some twine and a heart button around it! Necessity is the mother of invention!! .
A close up, warts and all… 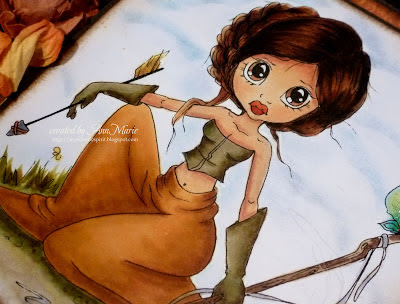 Thanks so much for your kind comments.  Have a great day. I will be entering this card in the following challenges: 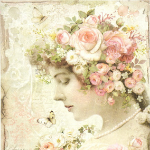